Winston Churchill as you have never seen him before

Seventy years ago on 10th May, Winston Churchill became Prime Minister of Britain. To commemorate the occasion, the Imperial War Museum is installing a compelling new interactive exhibit at the Churchill War Rooms in Whitehall.

This is an interactive web-based application, which allows visitors to view hundreds of superior-quality images in a Deep Zoom mosaic built by Microsoft Silverlight specialists, Shoothill. The mosaic features a giant image of Churchill, which viewers can ‘zoom into’ to see hundreds of other captivating pictures of the great man, in addition to private letters, documents, audio files and video footage.

Whilst museums have used Microsoft Silverlight to supplement their online content, Shoothill and the Imperial War Museum have broken new ground with the Churchill project, as it is the first ever Silverlight application to be used within a museum exhibit.

As well as familiar photographs depicting Churchill smoking his beloved cigars and giving the famous ‘V’ for ‘Victory’ sign, there are poignant snapshots from his youth and the most trying periods of his political career.

Churchill led the country through the most of World War II including the terrifying Blitz bombings of Britain by Nazi Germany between 1940 and 1941, and there are several striking pictures depicting Churchill inspecting the damage to various parts of the country after devastating air raids.

In equal measure, the mosaic features spectacular pictures of Churchill at play, engaging in favourite pursuits such as riding his polo pony (he was a keen player in his younger years), holidaying in glamorous spots like Monte Carlo and relaxing aboard Aristotle Onassis’s luxury yacht in Greece.

Several original documents and letters from Churchill College Archives are also embedded within the mosaic, providing a fascinating insight into Churchill’s personal life. For instance, the school report issued by St. George’s School in Ascot in November 1883 reflects an unhappy early education.

Users can zoom in to read personal letters written to Churchill by his wife Clementine, who gently reprimands him about his conduct towards colleagues, as well as the letter Winston Churchill penned to his predecessor, Neville Chamberlain, to outline his carefully-selected War Cabinet staff on his first full day as Prime Minister.

Image: A glance at the Churchill Deep Zoom on the Imperial War Museum website 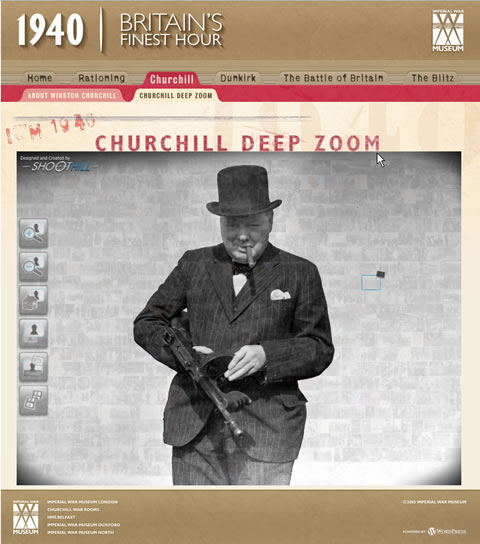