Article published by The Guardian on 17th July 2014

A new tool monitors river levels and publishes data via social media, helping prepare both citizens and businesses for the impacts of climate change.

Riverside homeowners across England and Wales can rest easy in their beds tonight. After a few weeks of good weather (by British standards), the risk of watercourses breaking their banks are minimal.

Of course, that could quickly change. All it would take is a freak summer storm for water levels to rise rapidly – a scenario all the more probable as climate change takes hold. Whatever the weather, though, a new web-based tool promises to keep householders and business owners abreast of changing river patterns.

“We have created a system for anyone who needs to know the current status of any river in England and Wales”, explains Rod Plummer, Managing Director of Shoothill, the Shrewsbury-based software firm behind the new GaugeMap service.

Using cloud-based technology, Shoothill takes information based on river gauges operated by the UK Environment Agency (EA) and publishes it via Twitter. Users of the social media platform can subscribe to any of the 2,400 different Twitter accounts, each corresponding to a separate EA guage.

Tweets go out twice a day, although the system is designed to provide up to four updates every our in extreme flood conditions. If Twitter account holders want more information, they can log in through to an interactive map hosted on the GuageMap website.

Water UK, a membership-body representing the water industry, describes the services as a “great educational tool” for informing the public about rivers and water bodies in their area. “Over time, it will help demonstrate the link between weather conditions, river levels and flood risk”, says Neil Dhot, spokesperson for Water UK.

“There are ten million users of the UK’s waterways [so] there’s an enormous amount of stress on our rivers”, adds Plummer, who insists the data is useful for recreational, agricultural and industrial purposes as well as for flood situations.

Uppermost in mind are power generation companies, water utilities and waste firms, which are collectively responsible for about 70% of all water abstracted from non-tidal sources, according to a 2011 report by resource efficiency company WRAP. The agriculture, forestry and fishing sectors are also large water consumers, using around 17% of all abstracted water.

“The ideal scenario would be to use the river levels to know when to take the water out”, says Plummer, noting that excessive extraction when rivers are running low could damage aquatic biodiversity as well as potentially endanger river users.

Insurers could feasibly benefit from the data tool too, Plummer suggests. Real-time river data not only enables them to evaluate their immediate risk liabilities, but it also equips them to allocate relief assistance where it is most needed. The same is true for local councils, car breakdown firms and other flood-support service providers.

The comparative simplicity of the tool should make it relatively easy to adopt overseas as well. Unlike flood warning systems, which rely on complex meteorological technology and specialist knowledge, water level gauges are low-cost and widely used around the world.

One important determinant of scaling the initiative is the availability of the relevant data. All too often, it isn’t publicly available. In that respect, the EA sees GaugeMap as a vindication of its decision to open up its datasets earlier this year. “This is exactly the kind of exciting use of our live data we hoped to see”, says EA chief executive Paul Leinster.

GaugeMap follows Shoothill’s hugely successful Flood Alerts service. Originally designed for Facebook, the flood mapping system is now hosted on the Environment Agency’s website as well as those of multiple media outlets. A winner in the 2012 Guardian Innovation Nation Awards, the interactive web-based service has had over 15 million hits since its launch two years ago. Plummer hopes the company’s new service will reach 50,000 unique users over the next 12 months. 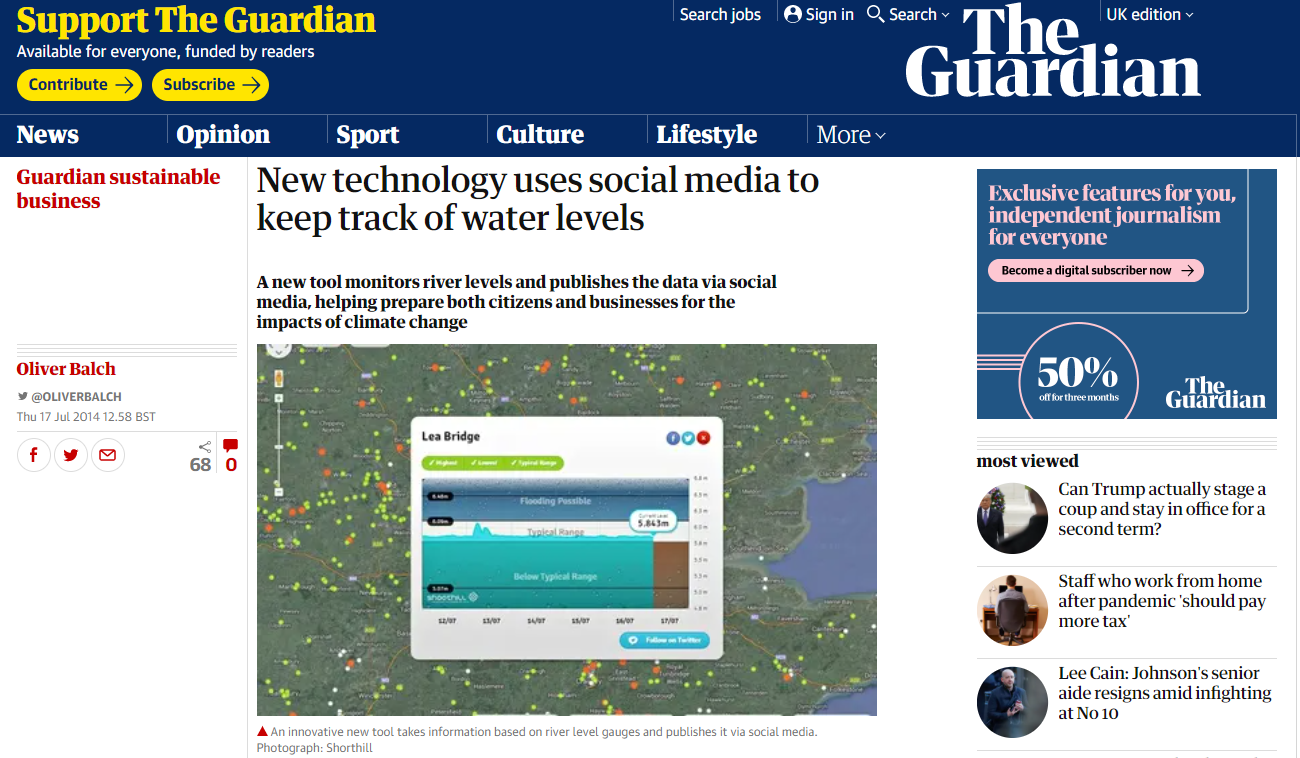