2020 has been a year of great success for Shoothill despite the many hurdles thrown at our feet regarding global affairs and periods of national uncertainty with the global pandemic. Shoothill’s response to the pandemic was PPE Exchange, a brand-new product launched in 2020 and one of the many highlights of the year. Honourable mentions also include the new My Flood Insurance subsidiary and the significant expansion and development of Housebuilder Pro.

With new business ventures and the expansion of pre-existing brands and subsidiaries, new faces have arrived at Shoothill to ensure its success and future growth. Shoothill have taken on board a new Digital Marketing Executive, Ryan Lloyd and a new Business Development Manager for Housebuilder Pro, Nick Taylor, and are in the process of recruiting further for 2021, particularly on the development side. There is plenty to look forward to in the coming months and years, but for now let us look at Shoothill’s 2020 highlights in detail.

March was where COVID-19 started to prove to be something of significant concern, with the country going into its first national lockdown – something none of us have ever experienced before in our lifetimes. It was during this month and the months that followed that Shoothill was in the early stages of planning its contribution to the pandemic effort with PPE Exchange.

In May, PPE Exchange was launched to the public, with the goal of bringing together buyers and suppliers of personal protection equipment across the United Kingdom, which was met with tremendous gratitude from the public, including popular comedian Dara Ó Briain! PPE Exchange went on to partner with the GMB Union and, at present, has had over 4,000 combined registered buyers and suppliers.

The summer was a bright one for Shoothill this year. In July, Shoothill won the Shropshire Chamber Entrepreneurial Spirit Award off the back of the success regarding PPE Exchange. This month also saw the launch of Covid Tracer, which is Shoothill’s second pandemic-related system, this time aimed at the hospitality industry, designed to help British pubs comply with new pandemic-related restrictions. Housebuilder Pro also welcomed Shropshire Homes as a customer during this month, showing that the Housebuilder Pro brand has real potential.

In August, Shoothill took on Nick Taylor and assigned him the role of Business Development Manager at Housebuilder Pro, another first for Housebuilder Pro this year. As a result, Housebuilder Pro has started to develop a significant presence in its existing market and continues to grow at a rapid pace.

In September, My Flood Insurance launched, a revolutionary new way of comparing Flood Insurance quotes for consumers in the United States. My Flood Insurance is owned partially by Shoothill and is Shoothill’s first ever venture in the United States. Shoothill’s expansion overseas is another exciting indication of potential future growth. During this month, Housebuilder Pro welcomed onboard Castle Green Homes and, towards the end of September, Shoothill took on a new face to fill a Digital Marketing Executive role, Ryan Lloyd. Since Ryan’s arrival, Shoothill has increased its presence on social media and has begun setting the scaffolds for Shoothill’s new brands and subsidiaries to enter their relevant markets.

October saw Housebuilder Pro take on a new customer, Wavensmere Homes. Ever since, the two parties have been working extensively to ensure the smooth transition of Wavensmere Homes’ existing systems and both parties are very satisfied with the result. Furthermore, Shoothill received a nomination for the Business Tech Awards in the ‘Tech for Good’ category regarding PPE Exchange.

November was a busy month for Shoothill with new launches, new business, and award nominations. Shoothill was named a ‘UK Business Hero’ in the month of November and as a result, received a letter from the Countess of Wessex, alongside receiving a nomination for ‘Digital Innovation’ in the Shropshire Chamber Awards. Housebuilder Pro’s Site Tracker launched, a free solution to tracking workers and contractors on and off work sites for housing development firms during the pandemic. During this month, Housebuilder Pro also took onboard Fernham Homes and announced the integration of Tardis 4G systems, a temporary broadband solution for construction sites across the UK, allowing Housebuilder Pro to be accessed in the most undeveloped and remote locations for site workers and builders.

“2020 has been a successful year for Shoothill and a historic one… We’re likely to never see a full office again.” – Rod Plummer, Managing Director

This year has been described as “historic” for Shoothill by Managing Director Rod Plummer in an interview. Not just because of the success. One of the biggest organisational changes of this year for the company has been working from home. Rod stated that “We are likely to never see a full office again”. Working from home during the global pandemic has been the go-to topic of the year business-wise and the biggest challenge businesses all over the country have had to deal with in the last 12 months.

“We are a small firm, and now with all of our development team working from home permanently, things are likely to be this way now for the foreseeable future regardless of the pandemic”.

After 15 years of trading, Rod states that he is used to having all of his colleagues around him every day but because of the pandemic, this has all changed forever:

“It feels like the whole western world has jumped 20 years into the future over 9 months. Technology has become an essential part of our day-to-day business. Every meeting and every discussion with the development team, apart from a couple unique exceptions, is all online using Zoom or Microsoft Teams”.

Rod recalls of the time where the Development Manager at Shoothill had to do a 3 hour commute every day to get to work and, now they are working from home, they have an extra 10-15 hours a week to work rather than travel.

“Working from home has been very successful, and I have to admit I didn’t expect it to be so. Productivity is up” added Plummer.

2020 has proven to be more successful than last year for Shoothill despite the new challenges and organisational changes. It is an extremely exciting time for the firm at present, with a lot of new brands and business ventures being in their early stages. Shoothill are building up an innovative fire and all it will take is a spark for things to really take off. We cannot wait to see what 2021 brings.

Merry Christmas and a Happy New Year from all of us at Shoothill.

Image: “Merry Christmas from all at Shoothill” by Head of Design, David Bissell 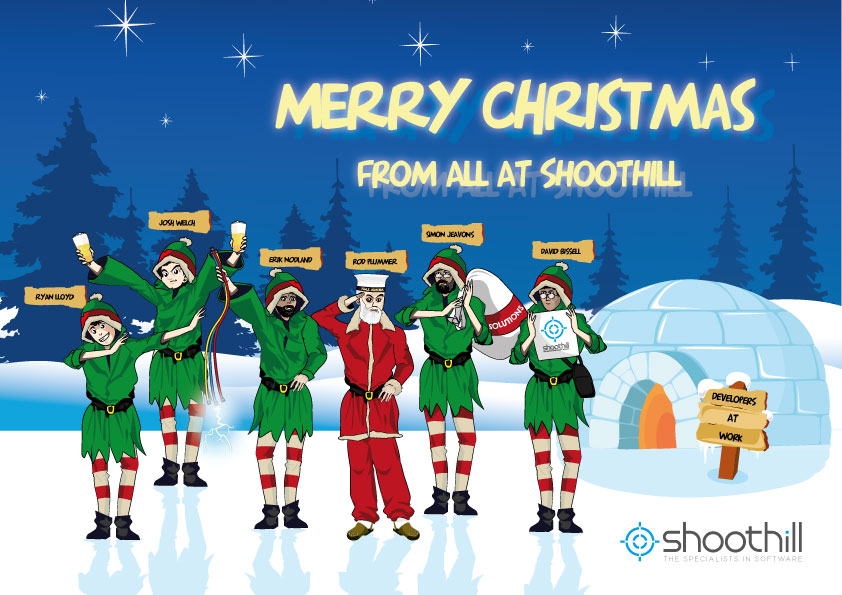