Sometimes you initiate a project not comprehending where it will take you. Flood Alerts came about due to such a project. In 2011, Shoothill were developing a property map for Microsoft. They wanted the properties on this map to include flood risk information. In order to achieve this, we set about acquiring flood data for the UK from the government.

Our intention was to use this data to create a system which would accept the post code of a property as an input and return details on its proximity to flood risk areas. We pitched this original concept to the Environmental Agency. However, the organisation’s representatives were won over by the premise, and suggested we take the project a step further by capitalising on their live flood data.

More than 5 million people in the UK live or work in flood prone areas, and there existed no comprehensive tools for predicting and managing flood risk. Such a service was therefore much in demand, and Shoothill saw an opportunity to create flood alerting software, reaching a large relevant audience through social networking.

This led us to Flood Alerts, an entirely self-funded project in partnership with the Environmental Agency, which utilised their live flood data in an innovative synergy with Bing Maps. At the time, making projects work with Bing Maps was challenging, but we had honed our expertise across multiple previous projects, which allowed us to tackle the complex challenge.

Regions prone to flooding were accurately represented as colour coded regions on a nationwide interactive map. The colour of the shaded area indicated the likelihood and severity of the flood risk. This tool was made available to the general public on a Facebook application.

The system also allowed users to set their location. This location needn’t be a property, but could be pinned anywhere in England, Wales, or Scotland, with latitude and longitude coordinates. Once assigned, Flood Alerts would notify the user anytime that a flood area occurred within a five mile radius.

The initial system was launched April 1st 2012, which was not a moment too soon. Beginning later that very month, the UK was stricken by an unprecedented series of weather events, and the nation suffered from serious flooding well into the following year. 1000s of private and commercial properties were flooded, and damages reached the billions of pounds. Flood Alerts became an essential tool for citizens to gauge the coming deluge and plan accordingly.

Many groups got in touch looking to use the flood alerts system for their own purposes. However not all were permitted to use the application within their company as it was hosted on Facebook. In response, we hurried through our stand-alone site. Shortly after, it was deployed, and we had a privately hosted version of the innovative tool. www.floodalerts.com

Its instrumental role during this serious flooding event led to much recognition, the tool even going viral. Within half an hour of its standalone launch, a BBC news story was released featuring Flood Alerts. Later the system was also deployed to and hosted on the BBC site. It was also housed on the Environmental Agency’s site, at first pro bono for sixth months, then later contracted for multiple years. Flood Alerts was even acknowledged by Richard Benyon MP, Minister for the Natural Environment and Fisheries. You can view this letter in the image gallery below.

In late 2013 to early 2014, the UK saw yet more flooding. In response the government instigated a ‘Flood Hack’. Developers from a swathe of technology and software companies came together to collaborate on preventive and protective measures. It was also during this Flood Hack that the Environmental Agency’s live flood data was made open source. Given our proven experience and skill, Shoothill were asked to create the APIs which members of the Flood Hack would use to manipulate this data. In the run up to the event we developed five APIs for live flooding, river level, river flow, groundwater, and rainfall data. 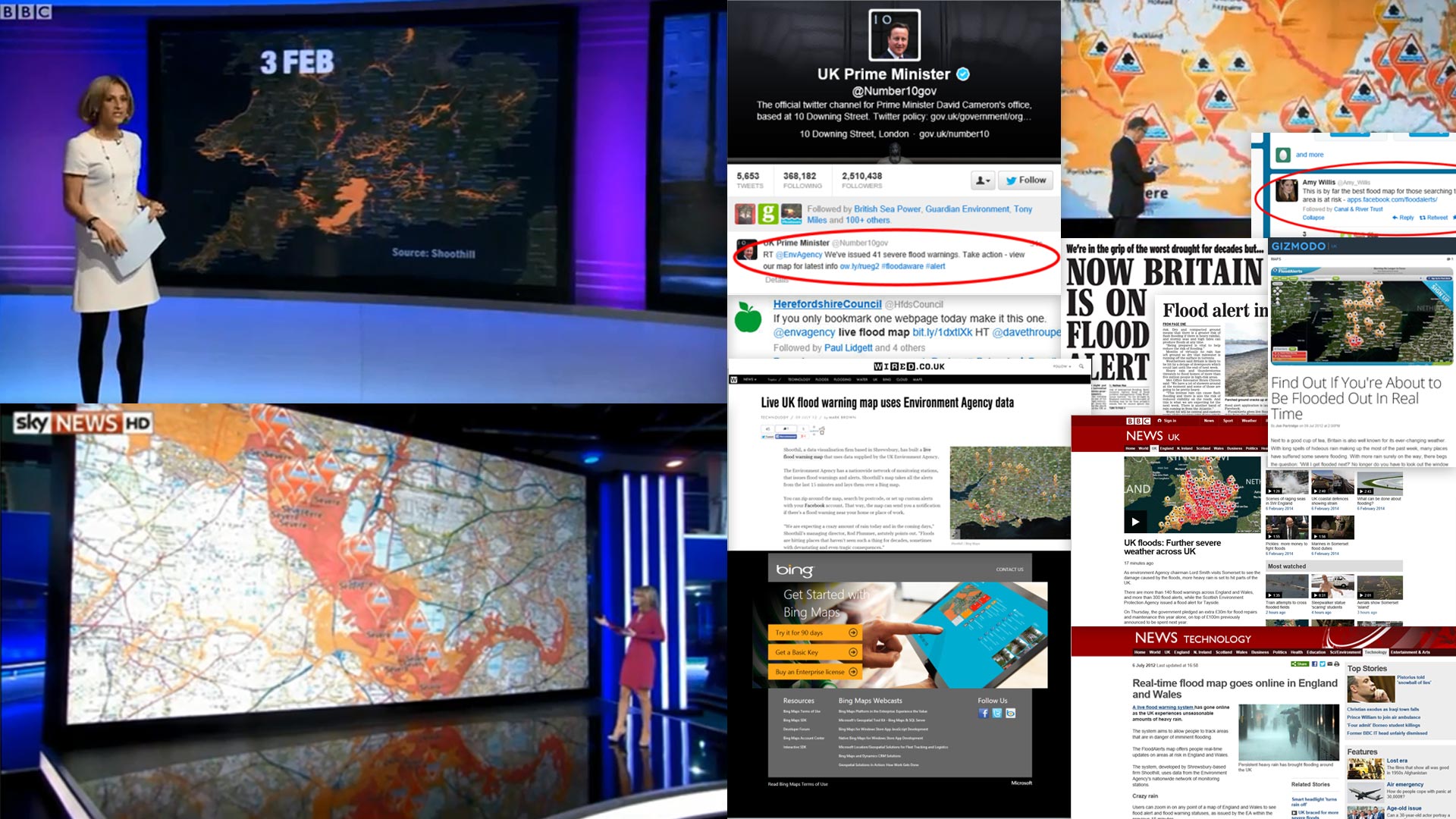 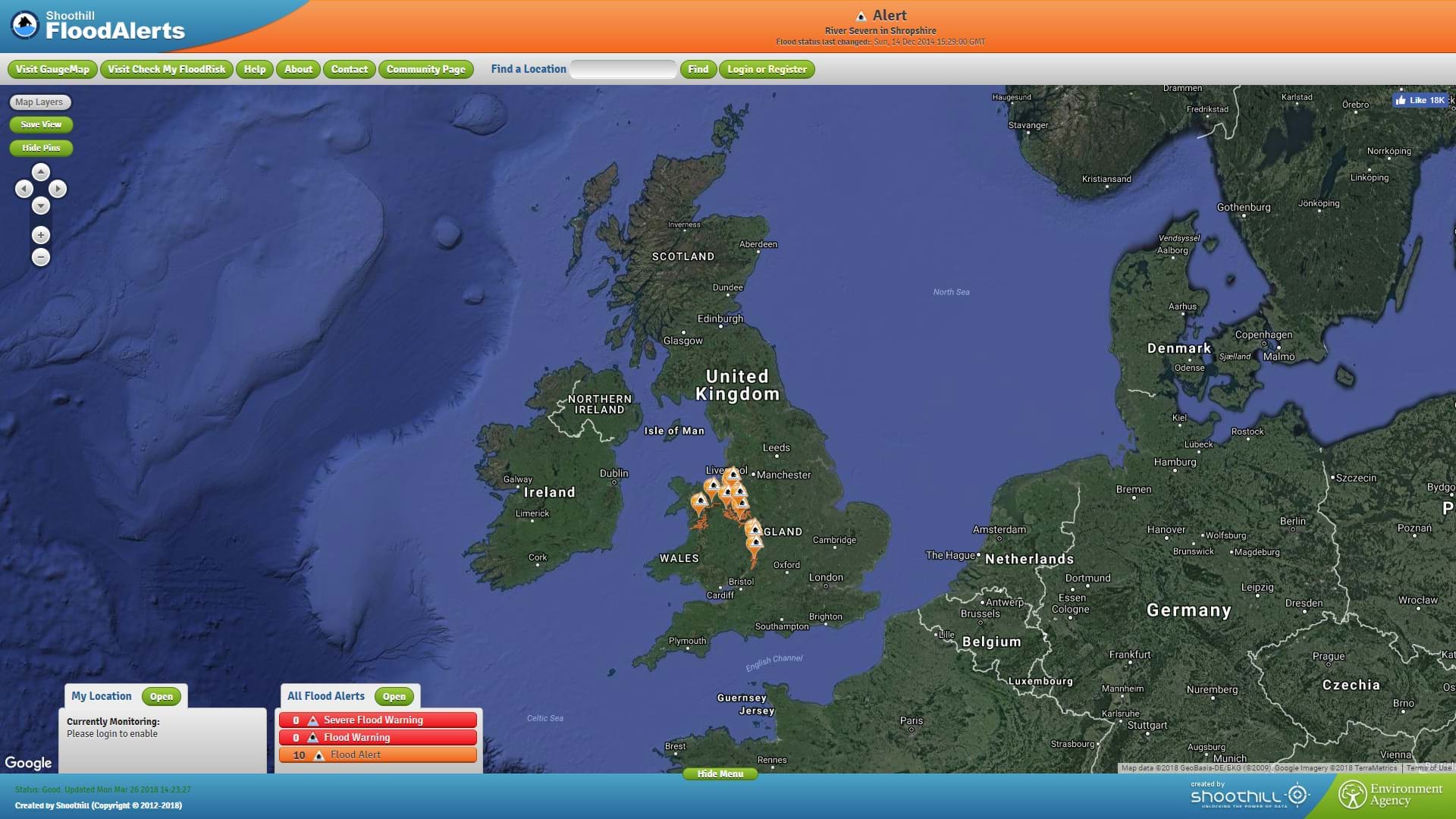 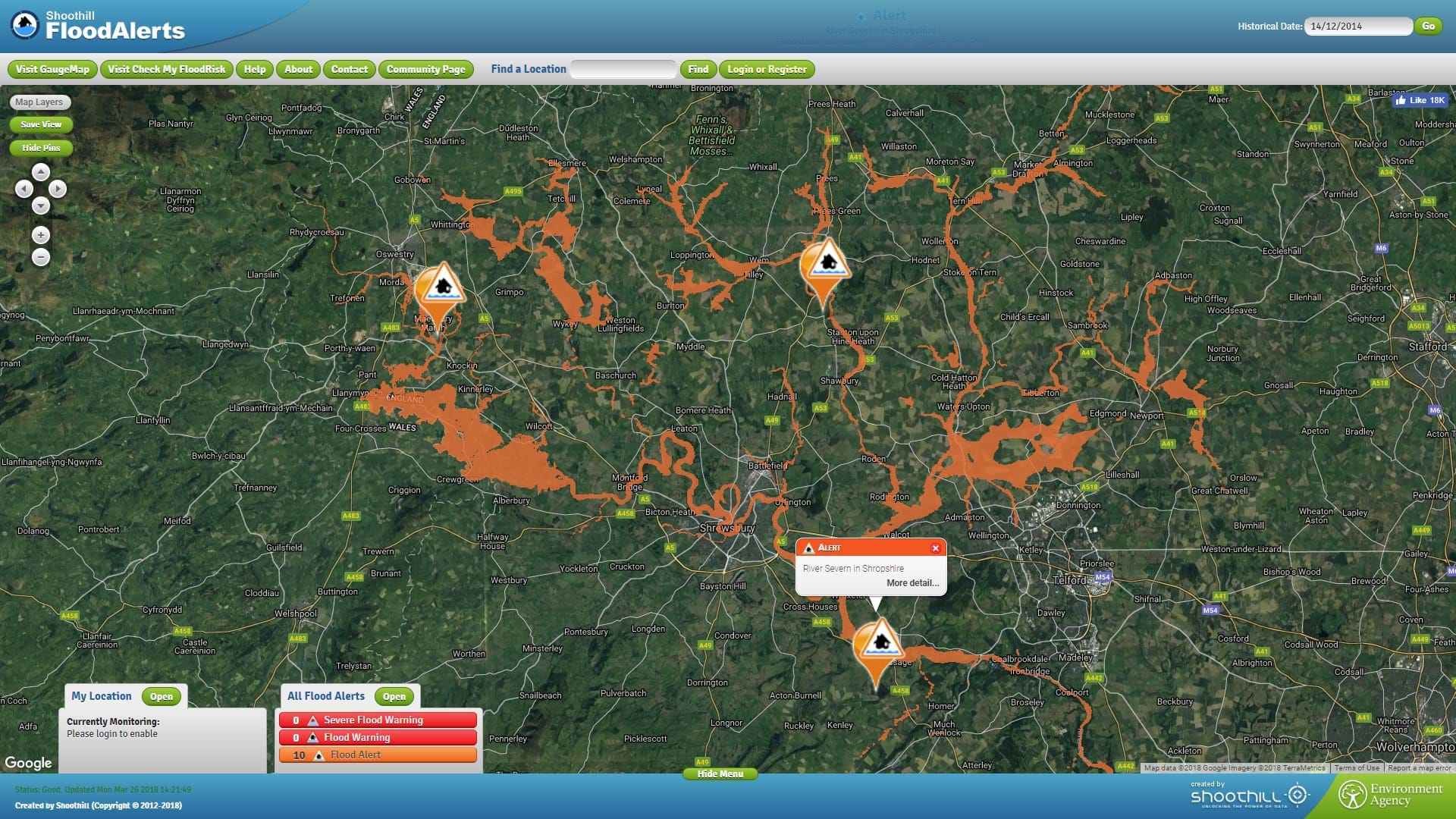 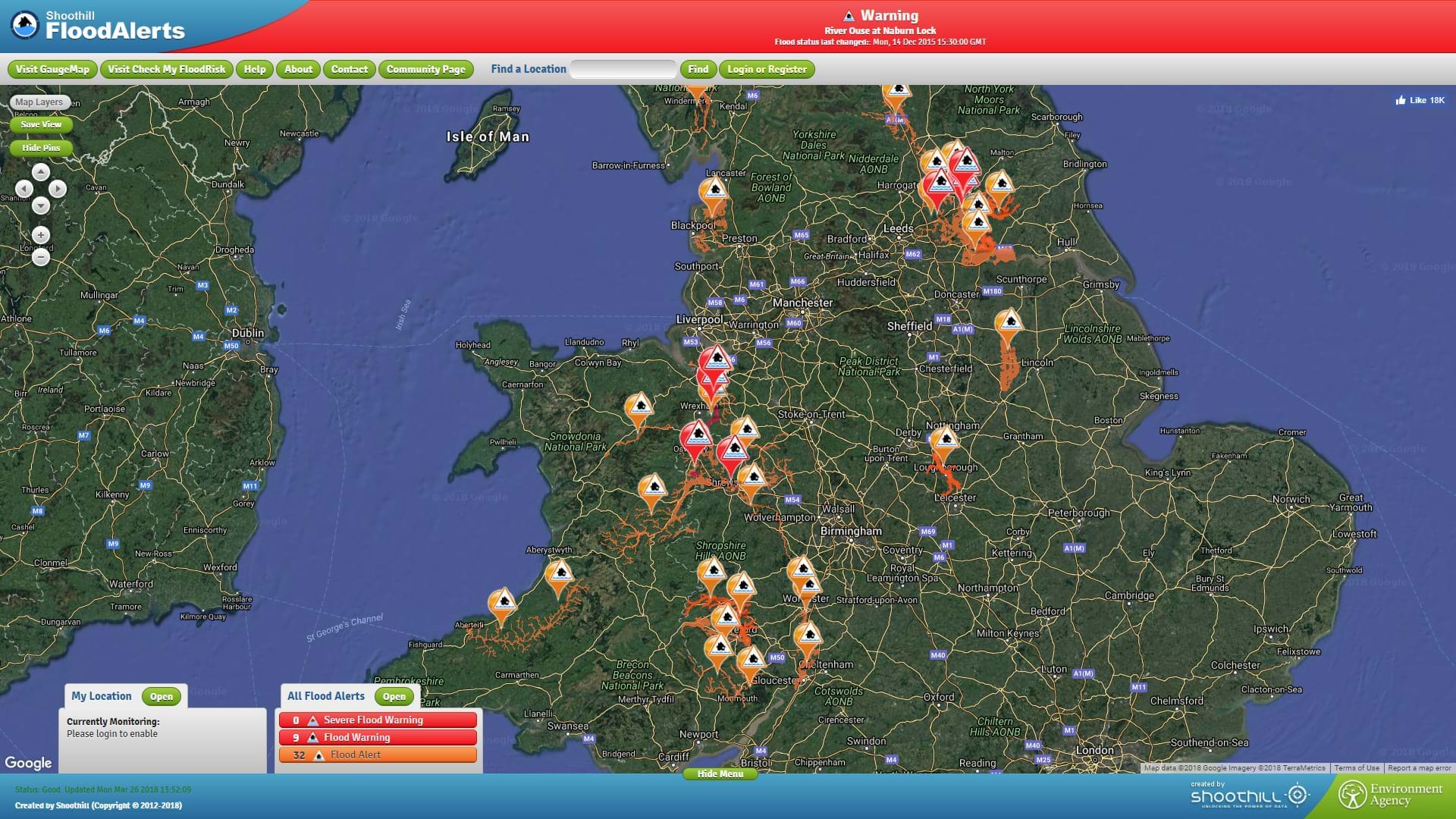 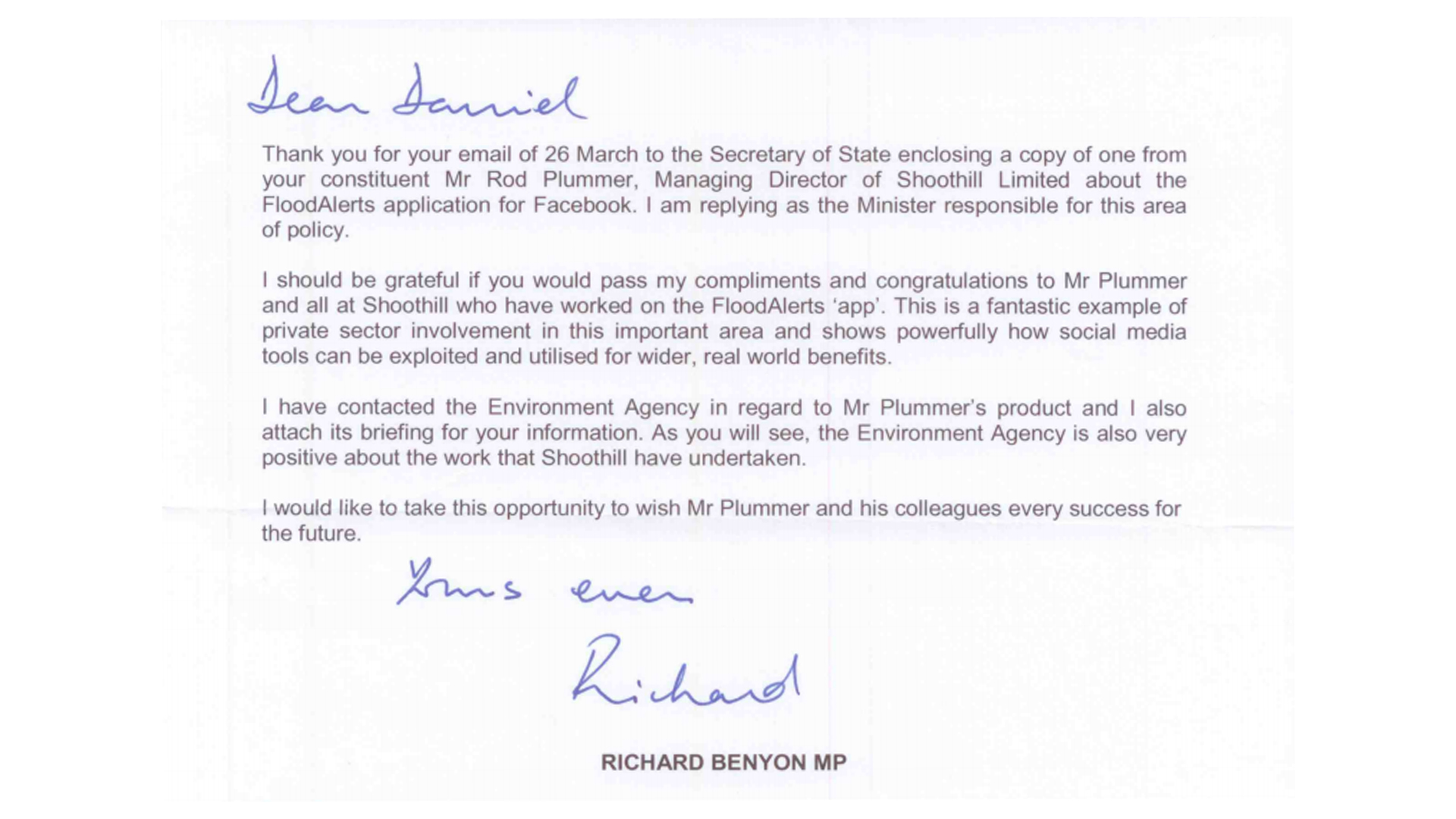 Ultimately, Flood Alerts has had a transformative effect on the world of digital flood relief. The project represented the first time flood data had been visualised using an online mapping tool. Furthermore it is, to this day, the only available system providing flood alerts for England, Wales, and Scotland.

We were pleased to see the site garner a great deal of media attention. On the same day it was launched, Flood Alerts made the front page of the Daily Express, with the headline “Now we’re on Flood Alerts”. Particularly given the timing, the software was lauded as a valuable innovation. It quickly went viral, with fifty million hits, reaching 8 million in a single day at its peak. During some of the worst flooding, the site was tweeted out by David Cameron, encouraging the public to capitalise on the clear visual information it provided.

For over two years the Environmental Agency contracted us for the right to host Flood Alerts on their official government site. Then in 2015, the organisation created a duplicate version of the app we had funded and developed. Identical in all features and function, the Environmental Agency’s app was a clear copy of our Flood Alerts system. Their site now features their direct duplicate in place of our system. Sadly, this act of cutting us out undermined the hard work and innovation which had gone into our project. We did learn, however, from this experience, that our software was of a high enough quality as to be coveted by influential groups.

Despite this, Shoothill have been celebrated for this project, a fact we are incredibly proud of. Given the severity and longevity of the flooding crises immediately following the site’s inception, Flood Alerts made a huge difference to so many lives and businesses. The software has also opened the door to a great number of deals and projects.

The innovation and skills we feel we demonstrated during our development of this mould-breaking system have inspired other similar works. These include Gaugemap, our award-winning river level map, a large-scale data management and visualisation project with an Australian water company, and a billing system with environmental alerts for the UK based company WaterPlus.

Data visualisation, mapping software, and innovation which can make a difference to businesses and lives are our passions. Flood Alerts is one our proudest projects due to its nationwide impact and significance. We learned much both during and following its development stages and have taken forward those skills to all our future projects.