Looking to reduce your bounce rates and increase your online sales performance?

We understand how important the customer journey is on your website. There are many instances, in all industries, where fast-growing companies require something a little extra to lower bounce rates and increase conversions. For e-commerce clients, this may include an overhauled online shopping experience. In the past, we have done everything from using Artificial Intelligence (AI) to automatically cut out images of faces for customised clothing brands, to building an online store from scratch for an adventure/experience firm. Whatever your goal, we can help.

Or are you a start-up looking to launch your first website?

Having a website that is attractive and practical is more important now than ever, with the first point of contact for a customer often being through a website before any other method when engaging with a business. Your customers want to see what is on the menu before booking or purchasing, see who else has used your services, and gage what their experience is likely to be before contacting you. Shoothill Web is our way of offering businesses a simple, quick and no-nonsense way of getting a web presence without all the hassle of working out how to do it yourself or suffer at the hands of unscrupulous web agencies. Here are some of the main benefits of signing up with our Shoothill Web package. 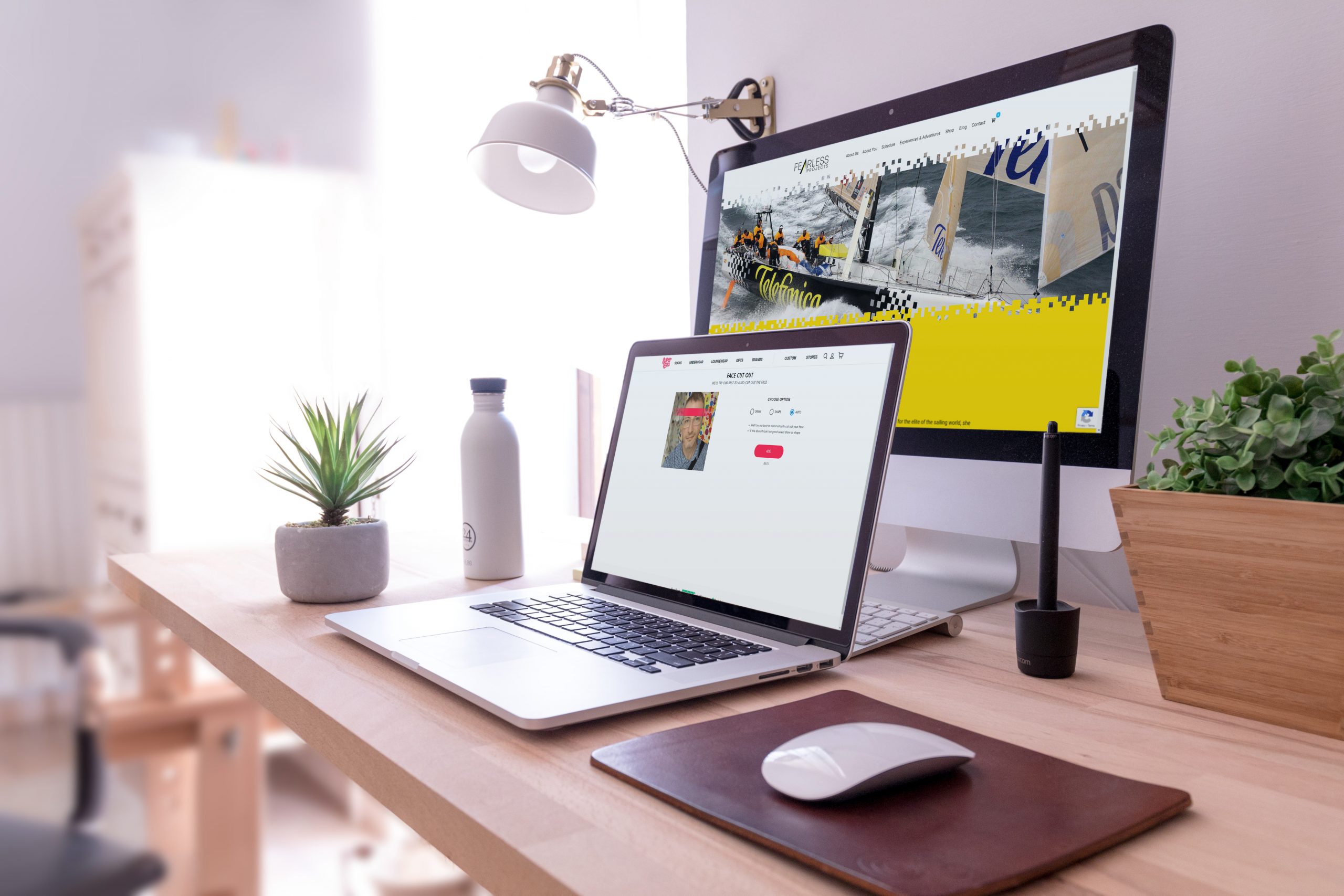 Many web design firms will charge you between one to five thousand pounds to build a bespoke and functional website, requiring full payment before your website is launched – but not with Shoothill Web. From as little as £99.00 per month, Shoothill Web allows businesses to benefit from their investment upfront, whilst spreading the cost as it is put in to use.

At Shoothill Web our speciality is you. You will have access to our dedicated team who can assist you not only with the initial design and implementation but ongoing support to keep your website at its best. Having won the Shropshire Chamber 2020 Entrepreneurial Spirit Award, we showcase how we are continually striving to use our expertise for our customers.

Visiting your web page will be the first insight your customers have into your services; if your website lacks aesthetic professionalism or it is difficult to use, the impatient customer of this digital age will simply shop elsewhere who possesses a better web presence. Our dedicated design team can help you build a website that reflects your business, through attractive visuals and practical layouts.

Keeping your website up to date helps you maintain engagement with your customers. We offer an easy to use content management system so you can update your website with no extra hidden costs from us. Not all customers access information through social media platforms so having your business’ key information easy to find is essential to create and maintain long term business.

Super Socks: The ‘largest, greatest and coolest personalised socks company’. In 2012, Charlie Rodman took a gap year to set up a personalised clothing business. Today, his company Nerdy Banana own many successful brands, in which Super Socks is one. The Super Socks brand began trading in late 2017 and sell fun and entertaining customisable socks aimed at families and pet owners.

In May 2019, Shoothill were challenged to innovate Super Socks’ point-of-sale systems for the Super Socks Live project, Super Socks’ expansion from ecommerce into the real-world retail space. The result was a highly sophisticated system that allows the customer to upload photographs to the kiosk or take a new one in store during their visit. Using artificial intelligence, Shoothill added a system that would automatically crop the image uploaded by the customer to a high degree of accuracy, ready to be placed onto the garments.

The impact of COVID-19 on traditional retail

In the current climate regarding the COVID-19 pandemic, this system Shoothill created became largely unutilised. It became abundantly clear that the system needed to be implemented properly into Super Socks’ online space. When Super Socks approached Shoothill for the Super Socks Live project, one of the most important requirements was that the customer would be able to see what their socks would look like prior to purchase. How could Shoothill ensure that the customers could correctly crop out their uploaded images and do so in a consistently fast and high-quality fashion all while entirely in the digital space?

The answer to the problem came as a sophisticated online system that integrated with Super Socks’ existing ecommerce platform, Shopify. Similar to the Super Socks Live system, this system uses a machine learning tool to recognise a human or animal’s face and crops them out at a high degree of accuracy before being placed onto a photograph of a sock to give a realistic visual response, adding an element of enjoyment to the customisation and checkout process.

Artificial intelligence, by nature, is a system that is designed to act like a human being. In this case, the system recognises what part of an image contains a face. ‘Recognition’ is a commonly referenced term regarding AI in modern times, the most famous instances of recognition being facial recognition in modern technology, such as Apple’s Face ID system, a revolutionary new way of unlocking a smartphone device without having to type in a passcode.

Like a human being, an AI system needs to learn about what they are looking at in order to change its behaviour to suit its intended purpose. In human psychology, this is called a ‘schema’, but in AI and cognitive technology, this is called ‘machine learning’. All human faces are unique, yet we as humans are still able to identify what a face is due to its common features; the recognition of common features is only capable as a result of viewing similar data hundreds of times. In this particular case with Super Socks, the AI system required tens of thousands of different data sets including faces in order to work at the desired standard of accuracy. Unlike most physical real life objects, faces can come in all sorts of different shapes, sizes and colours – making this particular case for Super Socks a complex task. It took 5 days total to train the AI model in Microsoft Azure.

This project became increasingly challenging regarding image backgrounds. For the AI system to differentiate between the subject masks (the focus images, the faces) and the unwanted backgrounds effectively, there needed to be a high contrast of colour. Where the colours are similar, such as black hair on a dark night background, the system often struggled to separate the two layers and crop out the faces effectively. The best way to overcome issues like these with AI is through increased repetition, hence the 5 day training period. 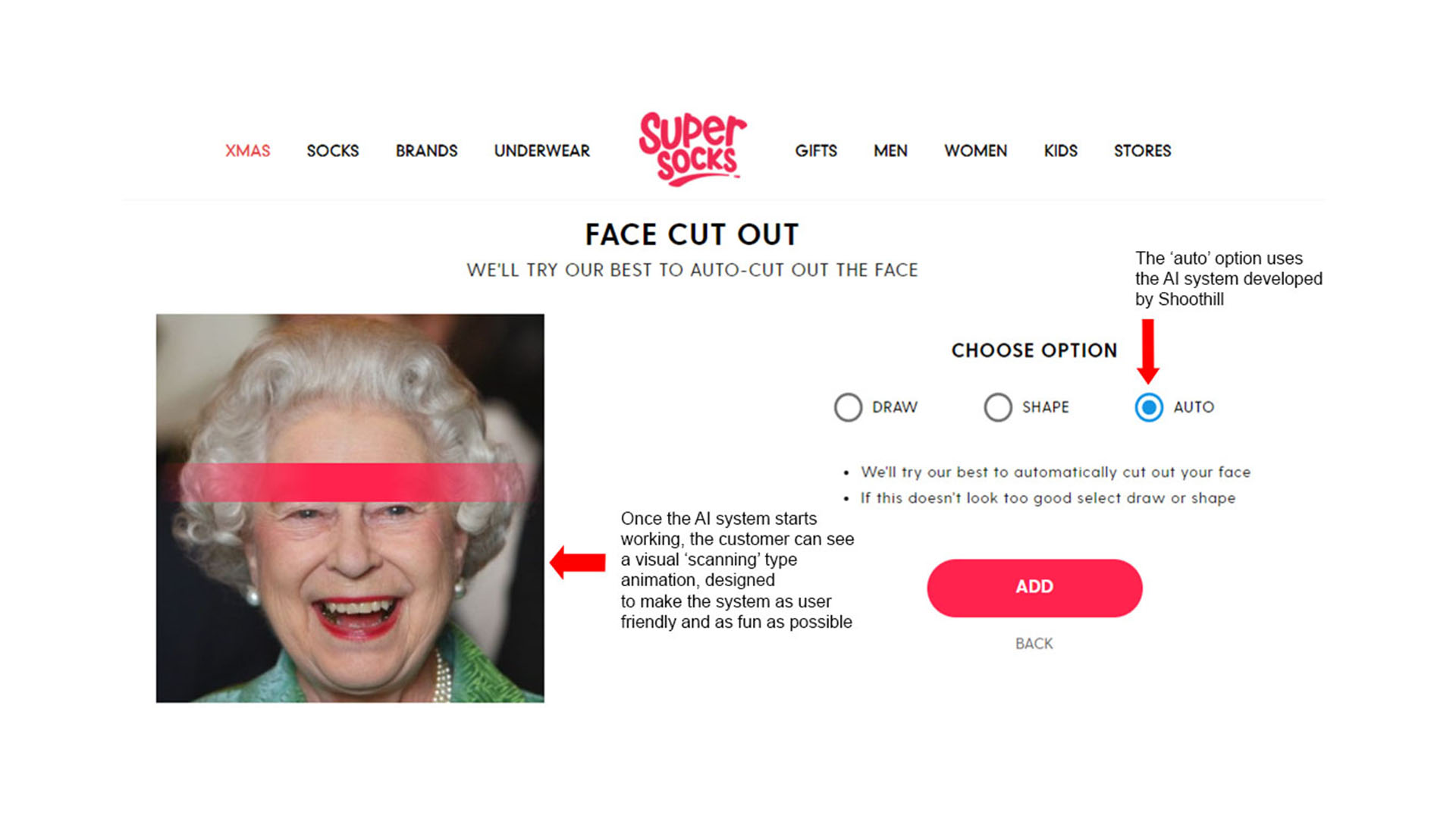 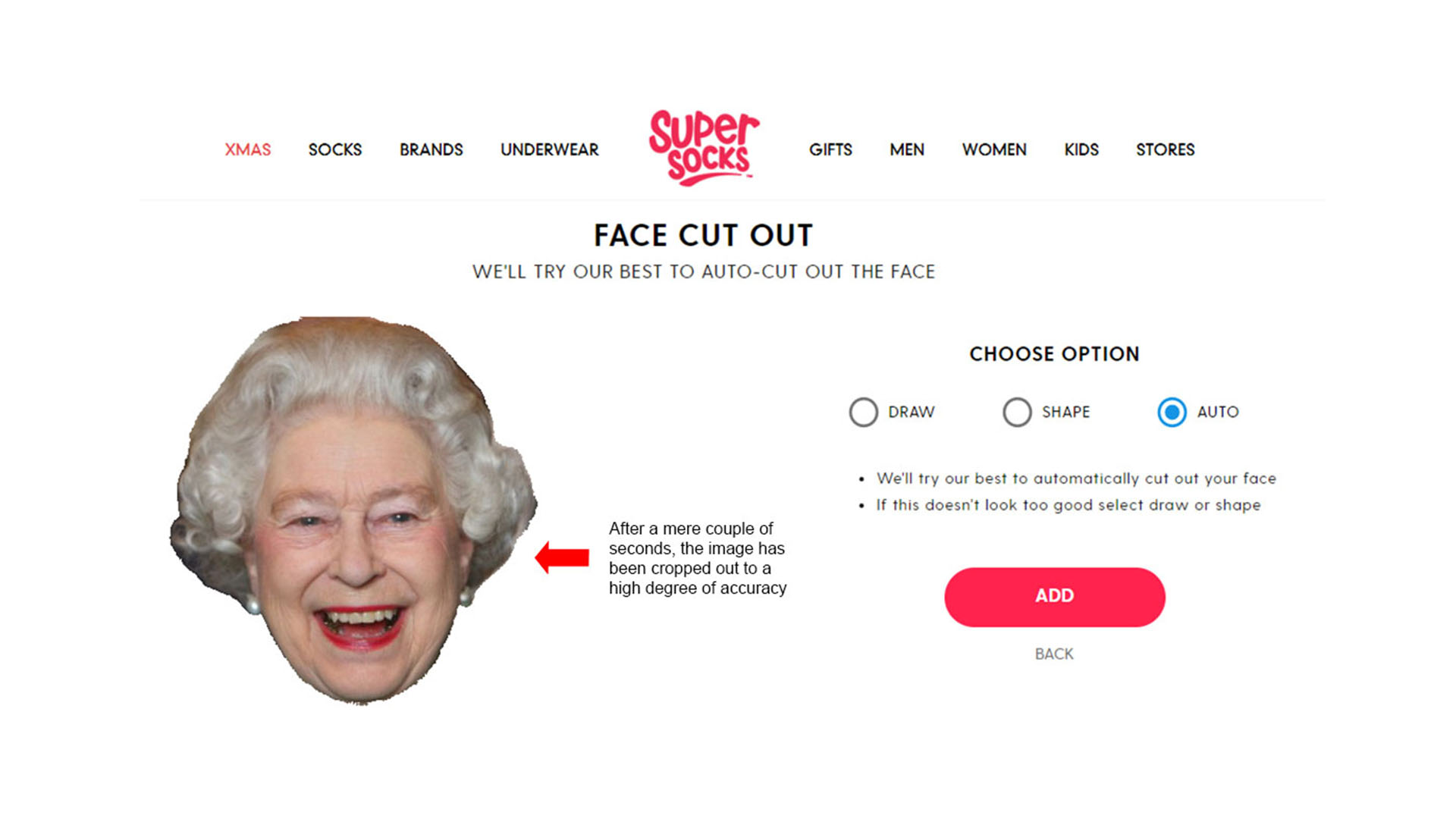 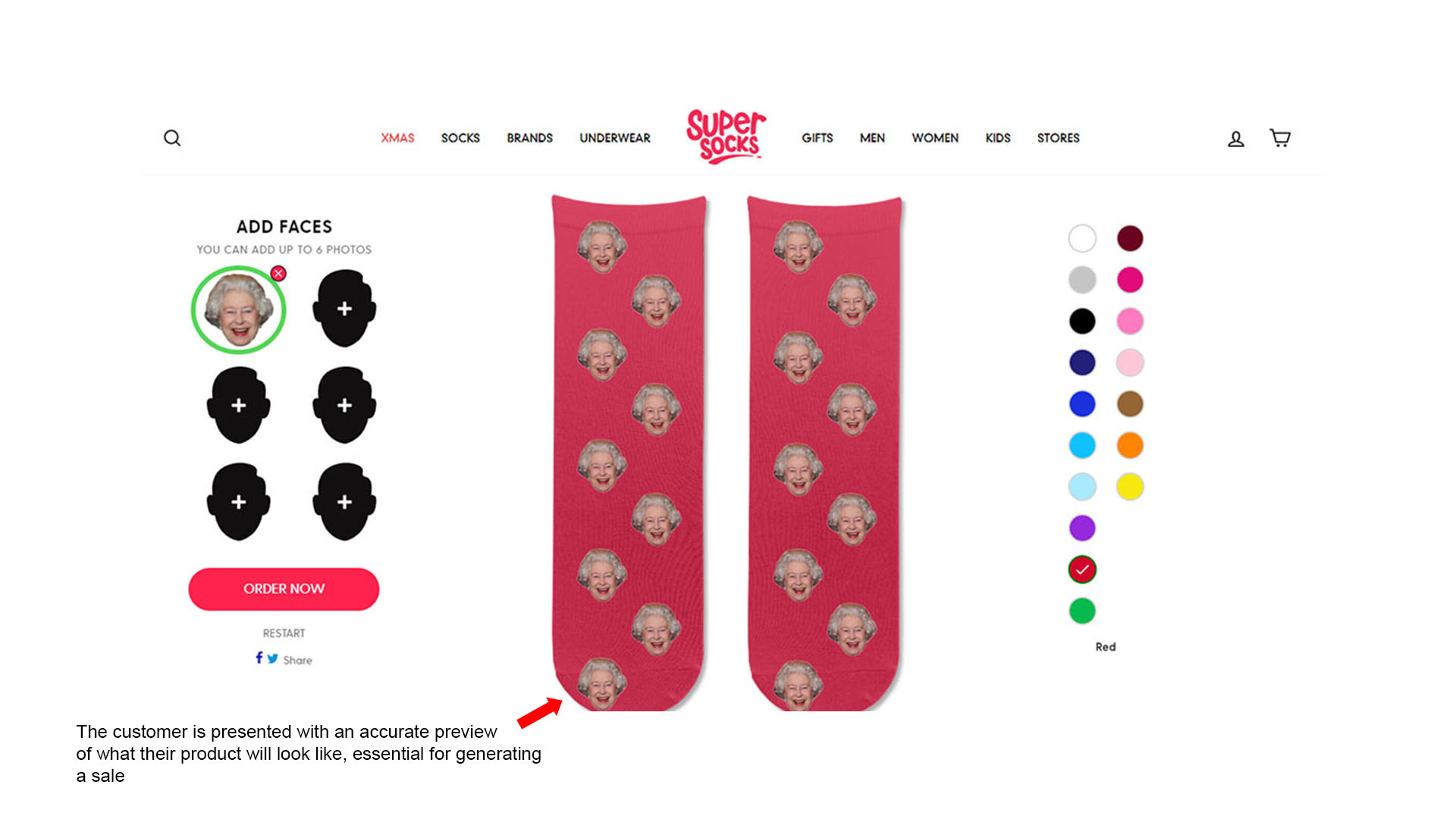 The result is a sophisticated, high quality and entertaining checkout system. Super Socks are incredibly grateful for this new system since it adds significant value to the customer checkout experience and it has been reported that it saved them a total of £6,000 (so far as of December 2020, since its implementation), since Super Socks previously outsourced this work abroad and is now fully automated thanks to this new system.

Shoothill have always been experts in artificial intelligence and are extremely proud to continue delivering value to our customers. As a result of this integration, customers spend less time at checkout thus receive a higher quality experience. The user experience is extremely important to Super Socks, since what they provide aims at being as fun and as entertaining as possible and we are happy to have hit the mark again, leaving a satisfied customer. Going into the project, the system had to be as visual as possible and we, along with Super Socks, are extremely pleased with the end result. The customer is aware of what is happening every step of the way thanks to the ‘scanning’ animation and the presented product at the end of the customisation process. The system presenting these visual responses is essential to retain customers, aiming to significantly reduce the bounce rate therefore increase sales.

Super Socks are one of Shoothill’s long term customers. Charlie Rodman, Managing Director of Nerdy Banana, previously commented that he had “not worked before with a company that doesn’t just do good work, but actually cares” regarding the Super Socks Live project.

Super Socks have reported these benefits as a result of Shoothill’s work: